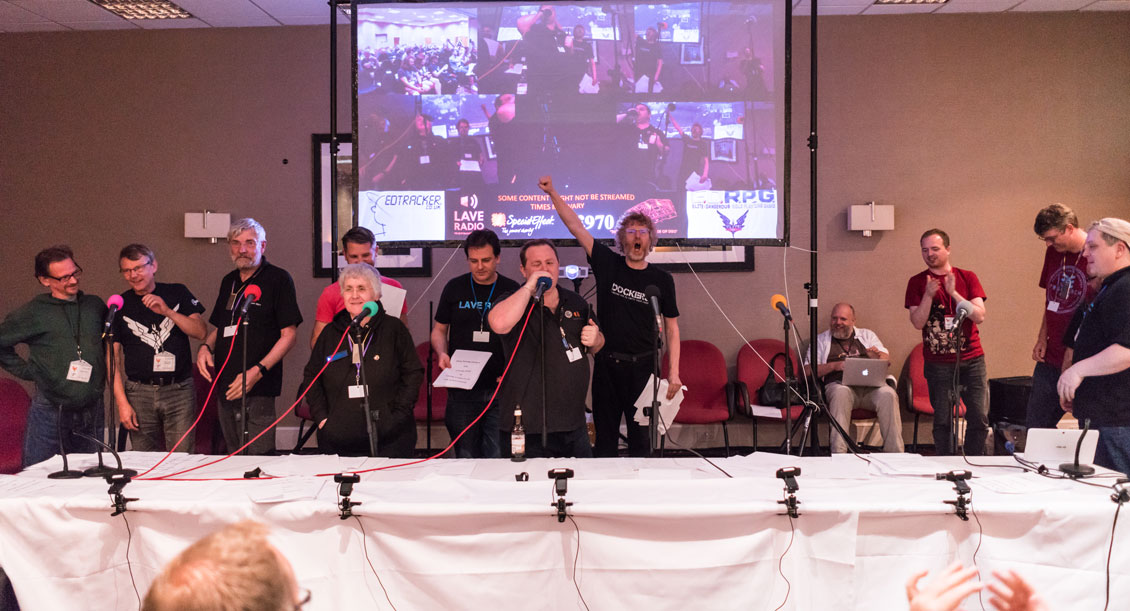 Simon Winnard
Script Writer
Simon is the writing "Genius*" behind the Dockers Podcast, from the creative days before the Elite Alpha came out, when Simon and Grant produced BS NEWS, the desire for something bigger and bolder was always there, eventually it emerged as a documentary based on the workers inside a busy space station.
Grant Woolcott
Audio Producer
Grant aka Psykokow, is the audio assembler of the project, although duties are often shared with writing and sound productions, the episode delays are always blamed on Grant. Grant is also involved in a number of other projects from Lave Radio to Hutton Orbital Truckers.
Iain M Norman
The Narrator
Iain is a shy man, who spends a lot of his time in the public toilets around the UK. He has the voice of chocolate however, and this makes him ideal for the part of Narrator. He has an amazing sense of humour which he regularly brings to the role.

Keith Oss Wilkins
David Broobin - Station Manager
David is the station manager, a calm level headed person with great management skills would probably do well in this role, however David has a short fuse, and penchant for mug launching. Keith brings the role a level of believability and sincerity that just works. There just isnt anyone else who could be David Broobin.
Helen Lister
May Swallow - McThargoids
May is a strong independent woman, and we needed someone capable of making her likable, soft but also firm and confident. Helen was perfect for the part, putting up with her own Husband may prove to be the secret behind her exasperated performances..
Robbie Lister
Finn Gerrin - Customs
The character Finn is a filthy pervert, always into the most obscene objectification of women. We worried that we would never find anyone remotely close to be able to meet this level of perversion. Fortunately we found Robbie and he has taken the role so much further than we are willing to legally quantify.


Ian Phillips
Doug Kittout - Customs
Doug is a very caring member of the customs team. Always willing to work with the customers to ensure great satisfaction. Quite a love of the animals passing through. Dutiful friend to Finn and a great part of the customs tag team. Ian brings a level of kindness to this role and has really grown into a truly likable character.
Danny Busch
Hans Supp - Security
The character Hans served in many of the wars against the Imperials, of course this does not cause any conflicts in his daily working. Hans is a strong head of security and there is nothing he likes more than polishing his truncheon and bouncing the tip off the top of a troublesome Imperials head. He loves Kerrash landing.
Jack Weaver
Michelle Boots - PA
Michelle is the personal assistant to Mr Broobin and clearly has a huge crush on her boss. Dutiful and faithful Michelle often finds herself on the wrong side of right as David uses her to carry out his wishes. John is an amazing Michelle and had the cast in stitches in the first readthrough with one word "medicsssss".


Steve Dobson
Lou Brusche - Cleaning Services
Lou is the head of cleaning services and he runs a tight stiff upper lipped department. Very Brittish Airman attitude and a desire to get the job jolly well done well. Dobbo has really nailed this role and it always gets us a good giggle.
Brian Willis
Will Clampitt - Docking Enforcement
Will is a new character, who is employed as station parking attendent, its unclear how he fits in with the rest of the cast as frankly hes as popular as a real parking attendent. Can Will carry out his essential work unhindered or will he continue to incur the wrath of David for clamping his Micra 15 years ago on Birminghamworld.
Ben Moss Woodward
Jack Soffalot - Baggage Handler
Jack is the heavy lifter of the dockers and long time love rival to Richard. Jack vows he will one day whisk May away from Richard and show her how a real man treats his woman. Jack is also long suffering best freind of Finn. Ben brings that real brainless feel to this role of someone who has dropped one too many heavy weights on their head.


Mia Hale
Trace - Cabin Crew
Trace is a very experienced player in the world of customer satisfaction, she always goes the extra mile to make sure none of her passengers leave her care unhappy. With the guaranteed happy ending, she has risen to the senior ranks of cabin crew.
Belinda Bateson
Fanny Longburn - Wildlife Documentary Star
Long Suffering Fiance of the now famous Wildlife Commentator Willy Stroker, Fanny carrys out all the footwork whilst Willy records suitable voice overs. A very much begrudged job, Fanny finds wildlife repulsive and invasive. She has a tendency for violence.
Peter Wotherspoon
Willy Stroker - Wildlife Documentary Commentator
A well recognised voice throughout the universe, Willy has spent years being as close to nature as he is comfortable with.. that is in a warm studio behind a monitor with a mic. Sometimes he even goes on location, not on foot though!! He is dropped in a comfortable cabin ready for his Fiance Fanny to do all the walking and exploration for him.


Shaun Pond
Number 2 - Hans Supp 2nd in Command
Number 2 is the dutiful brave and often slaughtered member of Hans Supps security patrols. He is always willing to run into danger to protect the vunerable and to fight the good fight.. We will miss him terribly.
Lenin Becozhezworthless
Script Writer
Lenin works closely with Mia Hale, and Simon Winnard to bring skits and comedy the like as yet unexperienced in Dockers history. Simon has selected a number of guest writers and invites anyone with a skit idea or advert to get in touch and get involved. Lenin is one of those poor fuckers who actually did.
David Pearson
Boris & Others
He is Russian, nuff said really... Dave always puts his vocal talents to use, and sometimes he's actually not that bad!! I know... right!


Chris Whitwam
Dick Trickle - Actor (Very Method)
Dick Trickle, an intergalactic famous actor, known for his devastating dedication to the method of method. His most famous role, the award winning percusionist 'Timmy Drumhand' won him many accolades and some criticism for his over use of the rythm method. He has yet to pull out of any role.
Paulo Rodrigues
LCU No Fool Like One - Canonn Interstellar Scientist
LCU has brought the Science. Along with Mia Hale, Simon Winnard and Lening, LCU has been responsible for bringing some well fact checked science to the scripts. Another of our new writers with a definite slant to the rude side.
Aemilia Hawk
Extra
Aemilia is a new recruit and has kindly lended her voices to various parts throughout the script.


Jim Bee
Extra
A very talented lover of sheep. Jim fills the holes left in the script with magnificent wordage.
Eddie Girdler
Brother Arsus Partus - Monk of The Enigmatic Lobes
Brother Arsus is a kind and gentle monk, often thought of as that uncle figure, you know.. the one you're parents don't invite to babysit.
Andy Girdler
Brother Peest - Monk of The Enigmatic Lobes
Spends most of his time in confensional atoning for his thoughts and actions. The booth usually requires a good wipe down once he's finished. Does love the talc.


Annie Jackson
Ivanka - Security at Leningrad Station
A strong minded security guard, you won't get dodgy paperwork past her on a good day, not without a significant bribe at any rate.
Andy Dev Betony
Dmitri - Counterfitter
If you need ID in a hurry, simply slip some credits in a brown envelope and send them his way..
Phil Ellis
Extra
Currently helping fill the cracks in parts and adding that spectacular 'generic' feel to the extra parts he takes.

The Retired Crew
How fickle life can be, and also some of the divas demands that we cannot make lead to cast members leaving us, though sometimes they do return (they're always welcome). We wish our retired contributers all the very best in their lives going forward and thank them for being part of some of the worst humour known to man.

Colin Ford
Richard Swallow - ATC
Character has Retired for Beyond:Dockers - We thank you for your service!
Colin originally auditioned for the part of the narrator, but the overwhelmingly sexy Ian M Norman stole it from him, so he instead took the Lead Role, and has managed to perfectly portray the down trodden, work shy eejit with almost perfection. It's almost as if he is the character... no wait he is..
Rory Scarlett
Sean Iswilly - ATC
Character has Retired for Beyond:Dockers - We thank you for your service!
Sean is one of the many air traffic controllers based in the station. He is a close friend of Richard and has a tendency to exagerate his stories. A wanna be womaniser but struggles to get his flirt going. Sean has been portrayed by Rory since the first read through. Its quite a naively innocent role.
Chris Carpenter
Number 2 - Security
Character has Retired for Beyond:Dockers - We thank you for your service!
Number 2 is one of the regular extra parts that has now become a full cast role. Chris was a long time Extra, it was nice to find a permanent place in our cast. He is very much like a persistent STD, he always appears when you don't want him and is very difficult to get rid of.. but its always a lot of fun getting him.
Thank you to our many many many other
Beyond:Dockers and Extras Cast and Crew
*genius = cock.